Like most of us, the Felton family tends to stay busy with work and other commitments. So when they’ve carved out a time for one of their favorite activities, boating, they’re not about to let something as unpredictable as the forecast stand between them and their Whaler.

“When we pick a weekend to go over to the Bahamas, there’s not much leeway,” David Felton says. “We pick it months in advance. So when that weekend comes, we’ve got to deal with the weather we’re dealt. Sometimes we’re crossing in 5- to 7-foot seas, and I feel totally comfortable on that boat.”

He’s talking about the family’s 345 Conquest, with its strong-but-quiet triple 350-hp Mercury Verado® engines. David and his wife, Nadja, live in West Palm Beach, Florida, and say they ﬁrst fell in love with the Conquest model at the 2014 Miami International Boat Show. “We were thoroughly impressed with the layout,” David says. “And we knew that Whalers were really well-made. After visiting the boat probably 20 times, we did a trial and then pulled the trigger.”

Apparently pleased with their purchase, they then upgraded to the 2018 model. Both boats turned out to be a good investment, and David and Nadja were happy with the buying process at MarineMax Palm Beach. “Our salesperson, Danny Brown, has been great to work with,” David says. “He’s always available, and he’s got a plethora of information.”

The Feltons had owned an express-style fishing boat prior to their ﬁrst Whaler, but they didn’t feel conﬁdent in its reliability or design, especially with their son, Gerrit (now 16), and daughter, Sydney (now 14), onboard. “We’d been caught out in the elements several times,” David says. “We wanted something that had an enclosure.”

With the conﬁdence of a Whaler under their feet, the Feltons have been able to truly enjoy their days on the water and focus on new horizons. Still, they maintain respect for the sea, what Mother Nature can bring on, and the thrill of what’s around the bend. “When going out on the ocean, you’ve got to be aware,” David says. “It’s an adventure; that’s probably the best way to describe it. And going to new places you’ve never been before is always exciting.” 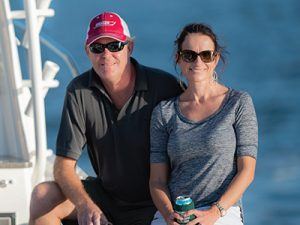 With just 50 miles separating the Feltons from the closest point in the Bahamas, they make an eﬀort to head there regularly, but they’re also eager to explore new routes. And while they love it when the kids join them, David and Nadja enjoy their alone time onboard. This summer, they took a one-week trip down the East Coast to Key West, up the Gulf Coast, up the Caloosahatchee River, across Lake Okeechobee, and on to the St. Lucie Canal to return home.

“When it’s just us, we stay on the boat, whether on-hook or in the marina,” David says, noting that he appreciates the 345 Conquest’s forward berth and its Dynamic Cabin System, which converts the bed into a dining table via an actuated lift. “It gives you a lot of room down in the cabin when you’ve got people onboard. And it makes for a really nice-sized berth when you’re spending the night. The layout of the boat is best-in-class, as far as I’m concerned.”

The Conquest also facilitates father-son time with Gerrit, who has gotten into fishing and lobstering in the Bahamas and the Keys. “We’re usually snorkeling,” David explains. “We go down there with a measuring stick, find ’em in a hole, stick a hand in, grab it out, measure it and throw it in the boat,” he says of the lobsters.

Both Gerrit and David are also certified to dive, and they often nab the crustaceans on charter-boat scuba excursions. Now that they’re becoming more experienced with their underwater adventures, they plan to use the Whaler. “I think the boat is set up really nicely for diving,” David says.

In addition to seeking out lobster, David and Gerrit like to join up with friends and head to the Abaco Islands or Bimini to target a variety of species, including wahoo, tuna, dolphin ﬁsh, sailﬁsh, snapper, grouper and yellowtail. “The pelagic ﬁshing is really good going oﬀshore here,” David says. “You go to around 600 feet of water and find weeds and birds or schools of baitﬁsh, and you can usually find the type of ﬁsh that you want to bring home.”

When they’re not boating and ﬁshing, the Feltons can be found at any number of musical functions. Both teens attend Dreyfoos School of the Arts, where Gerrit plays the cello and runs track, and Sydney plays the viola. “I’m really proud of them because they work really hard at it,” David says. He works in real estate and operates out of a condo at the marina where he keeps the Whaler, and Nadja works for Tesla.

The West Palm Beach area serves as a jumping-oﬀ point for the whole Felton crew to take day trips to Peanut Island when the mood strikes. Low tide exposes a nice sandbar stretching oﬀ the manmade landmark. “People anchor up there, and you can go walking out,” David says. “You’re knee-deep in the water, and it’s always fun to throw the Frisbee or the football around. It’s perfect to sit down with a cold drink and relax.”

The family uses the boat for quick hits of family time by cruising to waterside eateries in the evenings. A favorite locale includes the downtown Delray Beach area on Atlantic Avenue. “It’s a whole strip of restaurants and bars,” David explains. “And they have a public dock you can pull up to and just get out and walk to dinner.” 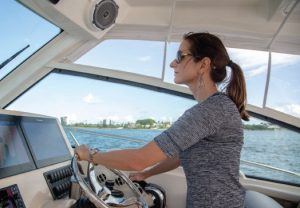 David loves being on the water in any way he can. As a Florida native, he grew up near the ocean but never had access to a personal vessel. It was a goal always on his mind. “I was in my early 30s when I got my ﬁrst boat, and I’ve loved it ever since and have had a boat ever since,” he says.

Nadja, on the other hand, wasn’t as keen on the idea at ﬁrst. “She thought I was crazy when I told her I wanted to get a boat,” David remembers with a laugh. But she quickly took to the on-water lifestyle. “She loves going to the Bahamas and taking our summer trips and staying onboard,” David says.

And now that the Feltons have had the Whaler experience, she’s conﬁdent in the family’s safety. “We’ve been out in some nasty stuff,” David says. “But it handles big waves well, and with the radar, we can track the storms. If we need to, we can go around them.”

Which is perfect, because it means that now, almost nothing stands between the Feltons and a trip to the Bahamas.

Texans David and Becky Burleson unleash their spirit of adventure — and their appetite for...

Plenty of space on the 350 Realm

The Rose family enjoys a laid-back Sanibel lifestyle with the help of their Boston Whaler...

Fun with friends or family, on the beach or on a Montauk