Professional angler Henry Waszczuk takes readers on a fishing trip to St. Petersburg, Florida, on the hunt for the mystical, massive tarpon.

Florida has some of the most incredible migrations of tarpon, whether you boat north, south, east or west. The warmer waters bring tarpon into numerous fishing grounds around the state. One spot that attracts tarpon is the Skyway, a 4-mile-long cable-stayed bridge spanning Tampa Bay, just south of St. Petersburg. Its considerable supporting structure houses a lot of baitfish, which in turn attract a lot of tarpon.

The migration of tarpon is pretty incredible and quite a sight to see firsthand. There have been times when I caught up to a school of tarpon and just sat and watched them rolling, gulping air as they traveled to their next feeding spot. Other times these massive fish, some reaching almost 200 pounds, are found in a large circle like elephants following each other; this phenomenon is referred to as “daisy chaining.”

However, it’s an entirely different ballgame when you don’t actually see the fish in the water, but instead hear the drag screaming and suddenly see the fish emerge, flying through the air. This is the mystique of migratory tarpon that anglers want to experience year after year.

Here’s how my most unforgettable tarpon encounter unfolded:

I dropped my 270 Dauntless in at a boat ramp near Anna Maria Island and headed straight for the bridge, intent on filling my livewell with white bait and then finding an open spot under the bridge to start chumming.

There are so many techniques that work in catching tarpon; some involve stalking, others involve casting out your line and playing a waiting game. Interestingly enough, tarpon are known as scavengers and will take food right off the bottom. That technique works very well around bridge abutments on an outgoing tide.

The key is to create a chum slick, and one of the best ways to do that is to cut fresh sardines into chunks and let them drift with the tide behind the boat. That’s exactly where you would have your lines with a live sardine or threadfin. Most importantly, make sure you have a quick-release anchor system, as you never know what these tarpon will do on a hook up. “Organized chaos,” they call it.

We happened to be filming a special for my TV show, Fishing the Flats, that day. Once we had gotten everything set up and were anchored perfectly, we started chumming. The tide was running well and we had two lines set up in the current. 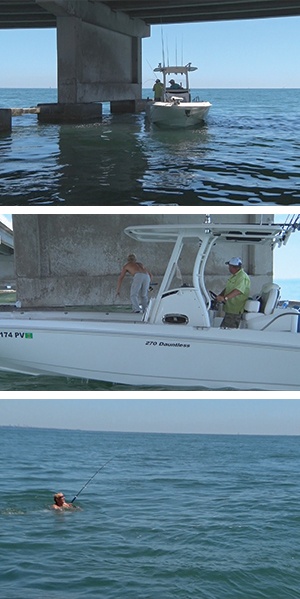 Before long, maybe 30 minutes, we had the first fish out of the water with an acrobatic jump. I realized the fish was running right into the current under the bridge, then it took a quick left around an abutment and straight out into Tampa Bay. Unpredictable!

My angling buddy Billy announced, “We don’t have a choice; I’m going in, give me the rod.” While the reel was still screaming, Billy swam around the large abutment while holding the rod and came back around to the Dauntless, which I maneuvered with the trolling motor to the bayside. I grabbed the rod, he climbed back in the boat and, yes, we landed this tarpon — now that’s exciting television.

Fossil records show that tarpon have been swimming in our oceans since prehistoric times, yet we are still trying to figure them out. The fact that they’ve been around for so long suggests that, from the beginning, they were blessed with superb physical characteristics that enabled them to elude the best aquatic predators of all time.

One thing is for certain, if you have the right boat — like the Boston Whaler 270 Dauntless — you can go in skinny water chasing these world-class fish or seek them out offshore; either way, the experience is going to be a memorable one!

Look no further than the 170 Montauk

From fighting Grouper to entertaining a boat full of friends, the 370 Outrage does it all.

Oh boy oh boy! It's another #FishingFriday and this week we are featuring our pro angler Henry...

This delicious recipe, courtesy of Nobilo Wines, celebrates a bounty of fresh seafood.