Dennis Tilden has been with Boston Whaler for more than 40 years, beginning with a manufacturing position in 1977. When the company moved from Massachusetts to its current Edgewater, Florida, home back in 1987, Dennis was among the first to make the move and was instrumental in getting the operation running. Following 15 years in manufacturing as a team lead and supervisor, Dennis made the move to customer service, and was soon managing the department. In 2004, he was named Regional Sales Manager for the Midwest before being promoted to Director of Sales, a position he has held since 2007. 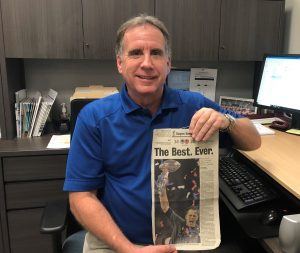 An avid Red Sox, Patriots and Bruins fan, Dennis is happily married with three children and seven grandchildren. During his tenure with Boston Whaler, the organization has seen a tremendous amount of growth and change, going from 250 employees to more than 1,000 and drastically evolving its product lineup. Throughout, says Dennis, “It’s been a great company to work for. Whaler provided me the opportunity to grow from working in Trim & Grind to becoming Director of Sales. One of the things I really appreciate is that hard work, effort and talent are consistently recognized and rewarded.”