I agree
All News 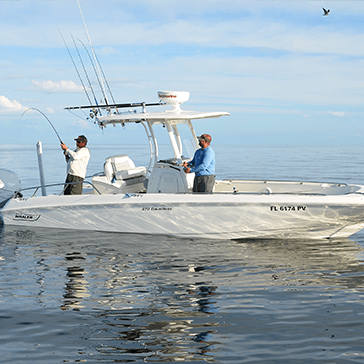 Professional angler Henry Waszczuk marks his 30th year on television this month with the season premiere of his popular show Fishing the Flats. Henry kicked off the week with an episode featuring the notorious Sanibel goliath grouper, a monster fish and worthy opponent.

Throughout the season, Henry will fish from a variety of Boston Whaler sportfishing boats, including models from the Dauntless, Outrage and Conquest series. Watch him tangle with big fish and extreme situationslike maneuvering into a mere 14 inches of water with his specially rigged 270 Dauntlesswith his trademark blend of wisdom and wit.

Boston Whaler is an incredible brand with a legendary reputation, Henry said. Every Whaler Ive fished from has more than lived up to that reputation. Whether were getting into seriously skinny water or running way offshore in rough conditions, theres simply nothing better.

Over the last three decades on major networks including FOX Sports and ESPN, Henrys TV episodes have always been educational, entertaining and exciting. In addition to the award-winning Fishing the Flats, which reaches nearly 100 million households each week, he also hosts the top-rated Fins & Skins Classic Adventures series.

Were proud to support Henry throughout the year as he demonstrates his mastery of many fishing environments, said Jeff Vaughn, Boston Whalers vice president of sales, marketing and customer service. Boston Whaler is dedicated to producing the most cutting-edge, capable boats on the market; its a thrill to see an expert angler like Henry demonstrating these capabilities.

For more than 60 years, Boston Whaler has been building superior quality unsinkable runabouts, cruisers and center console boats. Founded in 1958 and currently headquartered in Edgewater, FL, the company’s unique foam-cored construction process contributes not only unsurpassed flotation, but superior ride characteristics and durability. The current product line ranges from 11- 42 feet and is distributed around the world by a network of exceptional dealers. For more information about The Unsinkable Legend, please visit www.bostonwhaler.com. Boston Whaler is owned by Brunswick Corporation (NYSE: BC), the leading marine manufacturer in the world.